Biogas plant mixing – Energy costs cut in half by Landia 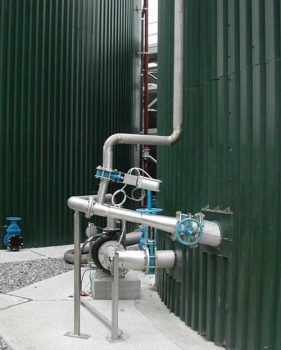 Landia is the company that quietly upped the game for the efficiency of biogas reactor mixing in 2016.

Landia has showed how those fortunate plant operators that have adopted the Landia GasMix system are quietly pocketing the income for the AD plant operations, and will continue to do so for the lives of their plants.

2016 was a year for a lot of technological advances in anaerobic digestion, and in this blog we have showed the awesome increases in biomethane production in the UK. However, of equal importance, but getting far less publicity is the progress being made in the UK AD industry reducing sacrificed anaerobic digestion bioreactor loads and energy, which otherwise could be sold. Every single kilowatt hour (Kw hr) expended on sacrificial energy loads running any AD plant, can be pure income toward the AD company’s bottom line.

Now that there are about a hundred more AD plants operating in the UK than there were 1 year ago, equipment manufacturers have an added incentive to devise and market AD plant energy saving technologies, and one company who has now been doing that for over 5 years is Landia Technology, with their.