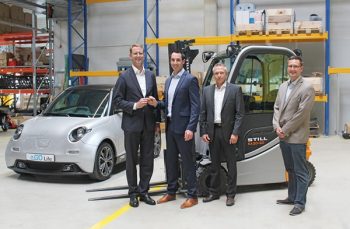 STILL’s Dortmund/Krefeld headquarters has presented an environmentally friendly RX 20-20 battery-powered truck as a donation in kind to the Machine Tool Laboratory (WZL) of Aachen RWTH (Rhine-Westphalia Technical University). The WZL’s big experimental hall was completely destroyed by a fire in February 2016. After the fire, the WZL Machine Tool Laboratory was faced with the challenge of replacing large parts of its technical equipment, to which STILL gave support and assistance. The Production Engineering Cluster on the Aachen RWTH campus, which was subsequently newly spatially divided, was officially opened and presented to the general public on 18 May 2017 during the Aachen Machine Tool Colloquium (AWK).

Efficient intralogistics is the key to success, especially at the interface between science and industry. This is particularly true in the practical testing of innovations in the electromobility area. It has a particular impact on research establishments when the scientific framework conditions suffer due to unusual circumstances, such as when a fire early last year completely destroyed the large experimental hall of Aachen RWTH University’s WZL Machine Tool Laboratory. The facilities that were entirely destroyed included machinery, plant and the workshops, as well as the laboratory’s own forklift truck. A rule applying especially in Industry 4.0 says: No innovations without intralogistics. According to Prof. Dr.-Ing. Günther Schuh, Managing Director of Aachen RWTH University’s WZL Machine Tool Laboratory: “We were already able to replace parts of our machine fleet in May last year, but because tools, workbenches and shelves also needed to be installed in the substitute areas as well as the machine tools, our Institute was faced with an enormous logistical challenge.” That’s why prompt assistance from the Hamburg logistics specialists STILL arrived just at the right time. Its Dortmund/Krefeld headquarters has now supported the WZL with an environmentally friendly RX 20-20 electric forklift truck as a donation in kind. According to Peter Wynands, headquarters manager (interim) at Dortmund/Krefeld: “After all, electrically-powered drive systems are one of STILL’s core competences.” This in turn corresponds to the fact that the truck is also being used on Aachen RWTH University’s campus in the e.GO mobile AG company’s area in which the small electric car e.GO Life was also developed, and where the production researchers led by Prof. Schuh show that highly innovative development processes and particularly cost-effective prototype and small series production runs are possible with Industry 4.0.

Prof. Schuh adds that “Due to the rapid response by STILL, the truck was available promptly in time for the move, and made our work very much easier. The truck is now used jointly by the professorship team and by the e.GO mobile AG company’s prototype fabrication department.”