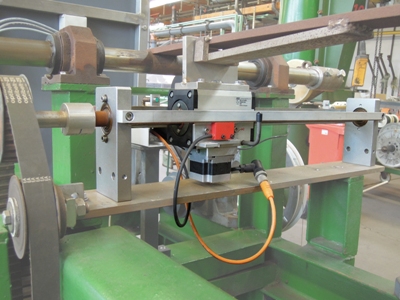 The Uhing Motion Drive is an Uhing rolling ring drive that was endowed “intelligence” by integrating sensors and an electronic controller. A visit to a company operating it illustrates how the system proves its worth during operation.

For many years, the Uhing customer, a steel refiner located in North Rhine Westphalia, has been using a machine that winds flat wire on a spool. The solution used so far caused frequent problems during winding that in turn resulted in interruptions of the automated downstream process. Also, fully wound spools had to be rewound often more carefully in order to obtain the required winding pattern. The switchover points had to be set manually during this procedure.

Searching for a system with optimum winding results

When looking out for a system offering more convenient and higher quality winding performance, the customer’s management contacted Joachim Uhing GmbH & Co. KG. Since around 1955, the company has been using Uhing’s rolling ring drives whose quality and reliability are highly esteemed by both the company’s management and employees. Impressed with the interesting features of the new product and convinced by long years of trustful cooperation with Uhing, the company decided in favor of the Uhing Motion Drive.

The trust in and the expectations on the intelligent traversing solution were high. Decisive for the purchase was, in addition to the functions the Uhing Motion Drive® offers, the fact that the winding plant existing at the customers could be converted to operation with the Uhing product. This compatibility saved the customer’s company great expenses that would have accrued if a new winder with a purely electronic controller had been purchased.

The flat material of the type the wire refiner uses is known to cause problems at the flange and the respective switchover points during the winding process. Uhing’s electrical engineers devised a solution that allows the Uhing Motion Drive to smoothly wind such material even in these critical areas.

How does Uhing Motion Drive perform during operation? A comparison of old and new work methods reveals significant differences.

With the old equipment, each spool and each mechanical switchover point had to be set up individually. Each time a new spool type or a new material was used, the mechanical stops had to be readjusted. As even spools of the same type have slightly different dimensions, this also applied to such cases where the next spool to be wound was of the same type.

The automation components that come with the Uhing Motion Drive make setting up the winding machine much easier. The desired winding patterns can be obtained without manual reworking. In consequence, the satisfaction of the wire refiner’s customers also increases. Using data stored in the Uhing Motion Drive control unit, the operators can select and configure the material and the spool type by simply pressing a button. This option greatly facilitates their job.

Visions for the near future

The Uhing Motion Drive is not only suited for winding flat but also round material. To customize the flange detection, Uhing also offers a combination of this system with the FA II Flange Scanning System that uses sensors to identify the flange and to trigger the direction change.

Considering the great number of functions and options: are there any wishes left? Giving an affirmative answer, the operators provide more detail: although the present solution for flange scanning is very easy to use and to adapt with buttons on the control unit, additional sensors or light barriers would make this even more convenient. Another wish was a multi winder where several traversing units could be operated from a single workplace.

It was also suggested to extend the Uhing Motion Drive® with additional interfaces to be programmed by the company operating the system. This would additionally support components such as monitoring or color sensors, meter counters, or cameras.

The cherry on the cake would be a log of spool windings. Details such as the date of winding, the material used, the article numbers, the employee in charge or the number of meters on the spool could be entered in an on-screen dialog or read in via a barcode and saved.

The Uhing engineers have responded to the customer requests and are currently implementing them. At least one of the desired solutions will be presented on the wire2018: saving of rewinder log data via RFID.

When asked if they would recommend the Uhing Motion Drive®, the company’s employees are all at one: Yes, without restrictions. The initial awe of the modern, intelligent technology was overcome quickly. In no time at all, the operators learned how to handle the well-structured system. They appreciate the reliable function and ease of use because production assisted by the Uhing Motion Drive® runs smoothly and flawlessly.

The experts of Joachim Uhing GmbH & Co. KG performed conversion jointly with the employees of the wire refining company who were trained to such a level that they are now capable of operating the system on their own. The use of standard components makes procuring and installing spare parts very easy.

Result: By converting the existing plant of the wire refiner to Uhing Motion Drive®, Joachim Uhing GmbH & Co. KG once again proved its worth as a competent partner for intelligent, practical solutions. The successful, low-cost conversion of the existing plant to Uhing Motion Drive® and the highly accurate winding patterns convince the customer of the engineering company headquartered at Schleswig-Holstein once again.