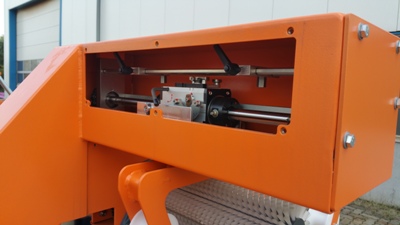 The Uhing rolling ring drive has been proving its application versatility for decades. And yet, new applications are constantly emerging. The linear drive now was found to be extremely useful in agriculture – in devices that layout and retrieve tubes or flexible pipes for drip irrigation.

Usually, the crop on the field is irrigated with spray-irrigation systems covering large areas. But these systems are inefficient as only a small portion of the water reaches the crop. The major part of the water evaporates or seeps into the ground without being beneficial to the roots.

One option how to increase the efficiency of irrigation is to use tubes or flexible pipes dug into the ground. These tubes feature drippers through which the water escapes and directly reaches the plants in quantities exceeding those obtained by spray irrigation.

Project for the efficient laying of irrigation tubes

Laying and retrieving of tubes or pipes is, however, very labor intensive. A project sponsored by the Federal Office of Agriculture and Food (BLE) was to find a more practical solution.

In a first step, critical parameters required to develop a prototype of a drip tube receptacle were determined. These included drip tube properties, the influence of field conditions such as moisture, soil conditions, and plant remains on the system, as well as the robustness in the light of required machine component interaction.

Factors relevant for the ergonomic operation were also considered. Different crops require different plant spacing, and every plant species requires an individual amount of water. As a consequence, coils of different sizes had to be used to accommodate the tubes. It was, therefore, important to see how easy it would be to adjust the winding pitch.

To begin with, conventional systems were tested in the prototype. Using a threaded spindle was found to be disadvantageous because its pitch cannot be changed mechanically. Soiled threads caused the machines to stop, and the spindle required a separate drive and a control device.

Rolling ring drive as the perfect solution Wolfgang Weber, Uhing’s Managing Director explains how the contact with the company headquartered at Schleswig-Holstein was established: “When searching the internet for a perfect retrieval solution, the attention of the Schöpstal project managers was drawn to the Uhing rolling ring drive. They contacted our technical consultant responsible for the region where the project was implemented. Soon after, an Uhing rolling ring drive was installed in the prototype. It proved to be the ideal solution for the problem.”

A separate drive could be omitted because the Uhing rolling ring drive can be coupled to the coil shaft mechanically. Coils and gear unit drive shaft are positively synchronized. Pitch and speed can change while the coil speed remains constant; in this way, materials of different widths can be wound up easily. The stroke is defined with manually adjustable, mechanical limit stops. In addition, the Uhing rolling ring drive is less susceptible to contamination than the other potential solutions because it runs on a smooth shaft and features wipers and seals.

“The robust Uhing roll ring drive convinced the project managers because of its simple operation and its adaptability to the respective task,” reports Wolfgang Weber. “The prototype trial was so successful that our drive will now be implemented in the drip tube retrieval machines.”