Navigation : EXPO21XX News » Industry 4.0 » PAL Robotics Claims 2017 to be the year of the stock-taking robot

In the face of growing competition from e-commerce, brick-and-mortar stores have the need to innovate. With lower costs, speed and ease-of-use on their side, online retailers are in prime position to take the lead in the retail world. So, what are stores doing about it? 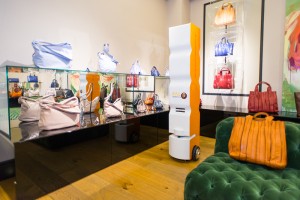 Early adopters of automation and AI (think computerized check-outs and online product recommendations), retailers have been quick to implement new technological innovations into their existing systems and processes.

From customer service to inventory-taking, we take a look at some of the ways robots are helping to extend the shelf life of shops.

In warehouses around the world, robots are already hard at work, busy delivering heavy packages faster and more easily than their human counterparts.

Robots have also been used in delivery. Amazon famously made their first drone delivery (of a TV streaming stick and bag of popcorn) in the UK in December 2016, and it’s widely recognised that drones will play a key part in retail logistics in the future.

But robots are also making their presence felt in stores. In an increasingly fast-paced, digital world, the quality of customer service has a huge impact on the success of a retail brand. As a result, retailers are turning to robots to assist customers in shops, harnessing big data to provide real-time product information and even offer personalised recommendations.

Another area of retail that’s embracing automation is stock control and inventory. Over the last year, new RFID technology and a growing need to streamline and automate inventorying has pushed the issue to the front– and PAL Robotics’ StockBot may be the solution.

Over-stretched retail staff has problems to find the time to perform regular inventories, particularly in chains with multiple stores spread across countries or even continents. This leaves retailers in the dangerous position of not knowing exactly what they have in each store – or whereabouts in the store their products are.

According to a report by Supply Chain Digest, the out-of-stock rate experienced by consumers is 17.8% – that means close to 18 customers out of 100 are leaving stores unsatisfied. Keeping track of stock can be a major headache for retailers, but luckily it’s an issue robotic platforms, like Stockbot, are ready and waiting to assist with. 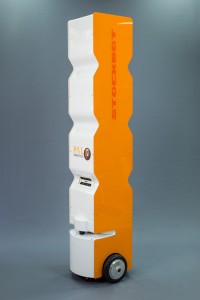 The benefits of automation are exponential. Employing a robot to undertake inventory not only streamlines and speeds up the process, it also results in a more accurate picture of misplaced, lost and stolen items – and frees up staff to attend to customers.

In a pilot undertaken in a 1500m2 store, StockBot reduced the time it took to perform a full inventory by 80% (from five hours to one hour), with an accuracy of 99.10%. Thanks to RFID sensors, an autonomous mobile base and a pioneering combination of lasers and cameras, Stockbot is cheaper, faster and more accurate than a human performing the same task.

With 12 hours continuous battery life and full autonomous capabilities, StockBot can be deployed overnight so that retailers wake up to a full report – with the items’ positions – in their inbox before 9am. Imagine waking up to coffee, croissants and captured data – the perfect combination.

StockBot at the ready

Robots have the potential to revolutionise all areas of retail, and have been doing so for the last few years. From customer service to logistics, robotic platforms have been transforming the way retailers sell their products. Now, it’s the turn of the stock-taking bot.