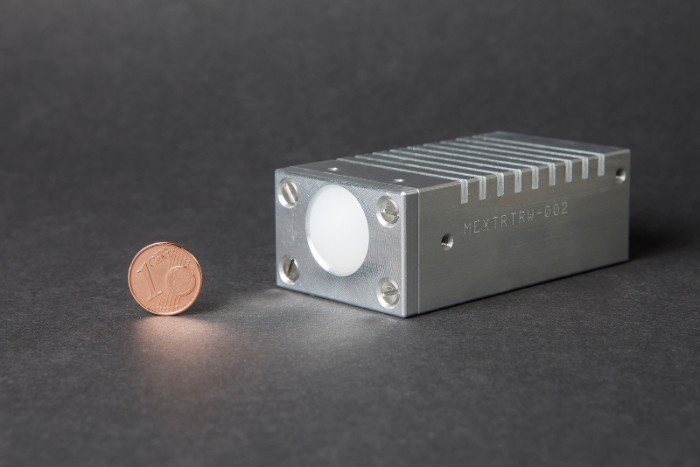 The radar module is no larger than a pack of cigarettes.
Photo by Fraunhofer IAF

Nowadays it is impossible to imagine industry without robots. Safety laser scanners mostly safeguard dangerous areas and protect people from collisions. But optical sensors have their limitations, for instance when plastic surfaces, dust or smoke obstruct their line of sight. Fraunhofer researchers have developed a new, high-frequency radar scanner that cuts through these obstacles. It can monitor its environment in a 360-degree radius, making it ideal for safety applications wherever people and robots work together.

Increasing connectivity of production systems in “smart” industry 4.0 operations is driving the interaction between people and machines. The trend is moving towards industrial robots that operate without protective barriers. A prerequisite for this level of co-working is that people must not be endangered at any time – but that is precisely the Achilles’ heel of collaboration between people and robots. Currently, laser scanners are used to monitor the danger zone around machinery, and to stop the machine as soon as a person enters the zone. However, optical sensors do not always achieve reliable results under changing light conditions. They also do not work if smoke, dust or fog limits visibility.

Researchers at the Fraunhofer Institute for Applied Solid State Physics IAF have developed a compact modular 360-degree radar scanner that is superior to optical sensors in many respects. This makes it a perfect choice for safety applications for human-machine collaboration. The radar works with millimeter waves that are reflected by the objects to be observed, such as people. Transmitted and received signals are processed and evaluated using numerical algorithms. Based on the calculations, it is possible to determine the distance, position and speed of the objects. If several radar units are used, an object’s location in the room can also be determined as can the direction in which it is moving.

“Our radar is not focused on one point. Instead, it sends out millimeter waves in a club shape. Unlike a laser scanner, the signals are reflected even when visibility is obstructed by an object,” explains IAF scientist Christian Zech. The laser scanner can reliably measure the distance and the position of a target – a person, for instance – only if the target is working in an unobstructed line of sight. However, IAF’s 360-degree radar can penetrate optically opaque material, which means it can identify the employee even if there are boxes, cardboard walls or other obstacles in the way.

High-frequency board technology for cost-effective systems

Previous millimeter wave radar systems – based on waveguides – are bulky and expensive. IAF’s scanner has a diameter of only 20 centimeters and is 70 centimeters high. The high-frequency module featuring indium gallium arsenide semiconductor technology is no larger than a pack of cigarettes and is located in the base of the scanner. “These days, millimeter wave applications are dominated by waveguides that are extremely expensive to produce. Thanks to a cost-effective mounting and interconnection technology as well as specially developed circuit boards, we can replace the wave guides with our high-frequency module that has been integrated onto a board measuring just 78 x 42 x 28 millimeters,” says Zech. The high-frequency module, which is the key component of the radar scanner, was developed by IAF researchers in close collaboration with the Fraunhofer Institutes for Reliability and Microintegration IZM and for Manufacturing Engineering and Automation IPA.

In addition to the signal processor, the complete system comprises a transmitting and receiving antenna with a dielectric – that is, electric non-conducting – lens. A self-turning mirror affixed at a 45 degree angle deflects the millimeter waves, guides them, and evaluates the entire room. Thanks to the use of a dielectric antenna, the angle of aperture can be freely selected. That means nearby objects as small as a centimeter in size can be detected as easily as large surfes that are far away. The system‘s range of operation is dependent on the application and can be up to several hundred meters. The scanner includes an Ethernet interface and is therefore suitable for industry 4.0 applications.

In order to evaluate the measurement accuracy and reliability of the 360-degree radar, the researchers carried out hundreds of measurements in the lab. Maximum deviation from the mean was less than a micrometer; standard deviation was 0.3 micrometers.