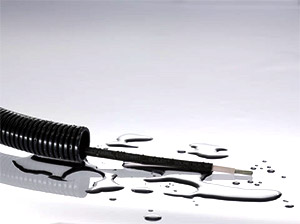 If photovoltaics cables are exposed to damp over a long period of time, this can lead to decreased performance and insulation resistance – the consequence of which may be short circuits, which in turn can lead to failure and damage to the respective equipment. The reason: moisture may infiltrate standard solar cables if they are lying in water for a prolonged period, and can cause failure in the worst-case scenario.

The Stuttgart-based Lapp Group presented the first permanently waterproof solar cable in the form of the ÖLFLEX® SOLAR XLR WP at the Intersolar Europe exhibition in Munich (10th-12th June), at Stand 458 in Hall A2. The cable in question is an electron beam cross-linked solar cable of type PV1-F in accordance with TÜV 2PfG 1169/08.07 for durable, weather-resistant use in photovoltaic systems. Its optimised cable design and the constantly high contact resistance mean that it will still function reliably even after years in the water. The ÖLFLEX® SOLAR XLR WP is a safe alternative – particularly in areas which are prone to flooding, or where cables are installed underground in protective conduits where water, heat and moisture can accumulate.

Connection system for the organic photovoltaics
Photo by Lapp Group

Lapp also develops and manufactures suitable connection systems which are tailor-made to customer wishes. The most recent example is the revolutionary connection system for organic photovoltaics currently on display in the German Pavilion at the 2015 World’s Fair (Expo) in Milan. Energy-generating solar trees realised using organic photovoltaic (OPV) technology are the focal point of this exhibition. In contrast to conventional solar modules, they consist of flexible, film-integrated OPV modules. The connection technology to produce these came from the Lapp Group. 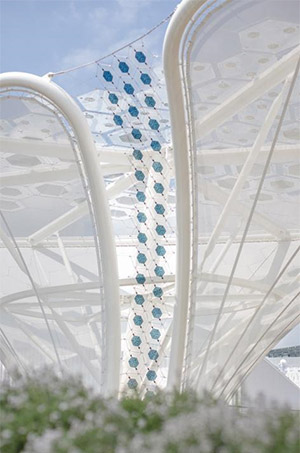 “We have developed an entirely new process for connection and cabling that is also highly suitable for particularly delicate OPV modules,” explains Stefan Koch, Product Manager at Lapp. The OPV modules come from the Nuremberg-based company BELECTRIC OPV GmbH which has produced the semi-transparent OPV modules conforming to the specifications of the design and architecture company SCHMIDHUBER. The hexagonal OPV modules for the “canopy” of the solar trees are available in four different varieties, with a diameter of either 340 or 880 mm and different active areas which can be inserted into the architectural component made of film and wire braiding without attracting attention. Conventional PV junction boxes and thick cable connections would not have been at all suitable for this design concept.

The OPV modules and the innovative connections are literally made from one cast – unlike with conventional photovoltaic modules, there is no longer a junction box attached to it; instead there is a so-called access point that is cast directly onto the flexible OPV film and merges with the film. This method prevents capillary action and therefore also damage due to corrosion. Additionally, the connection components of the Belectric modules in the solar trees are, at only 30 mm x 20 mm, considerably smaller than those in conventional systems. The cables to be used by the modules were selected according to customer-specific requirements and are only 2 mm wide. They have been produced in grey for use on the German Pavilion so that they can be integrated virtually unnoticeably into the grey wire braiding of the design components.

Organic photovoltaic solutions can be integrated entirely into building envelopes or other objects. The flexibility of their shapes, colours and transparency opens up a diverse range of applications. Stefan Koch says: “We tailor our connection systems specifically to the many varied and individually created OPV variants, and are able to design connection systems which are much smaller and less noticeable than is the case for conventional PV connection and wiring systems.” The transparent solar films with the innovative technology from Lapp will also be presented for visitors to experience at Lapp’s stand at the Intersolar Europe exhibition.

Lapp has long been making a name for itself as a driving force for innovation in the photovoltaic industry. For over ten years, the company has been successfully developing connection systems for photovoltaic modules and has regularly pushed the market forward with its intelligent innovations, for example the well-known connector system EPIC® Solar and the cable series ÖLFLEX® Solar.