Pioneers of Industry 4.0: The Robotic industry

The robotics industry has been booming in recent years, and this trend is set to continue in 2016 – both in the global marketplace and at HANNOVER MESSE. This year’s show, which runs from 25 to 29 April, will feature many of the key players in the robotics industry, including the likes of KUKA, Kawasaki, Universal Robots, Yaskawa, Stäubli, and Mitsubishi. This year’s official Partner Country, the United States of America, will also be stepping up to make robots and autonomous systems a major highlight at the world’s most important trade fair for industrial technology. HANNOVER MESSE’s strong focus on Industry 4.0 is also ensuring increased interest in the robotic systems instrumental in achieving the fourth industrial revolution. 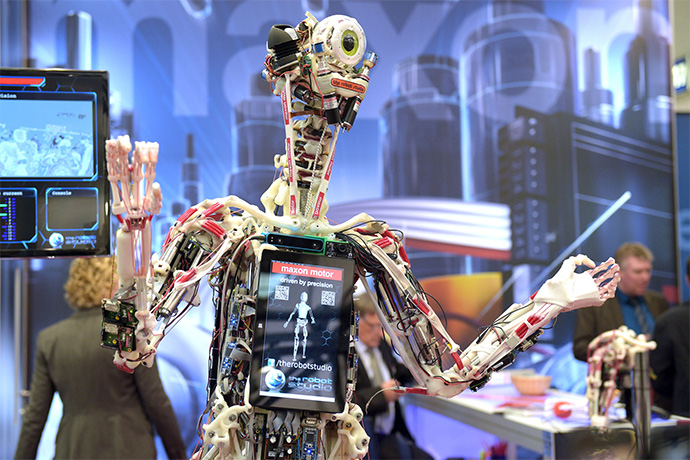 Their enormous flexibility makes robots a critical element of the Industry 4.0 automation equation,” said Arno Reich, who heads HANNOVER MESSE’s Industrial Automation team and is thus also responsible for the fair’s robotics exhibits. “The boom in robotics exhibits we have been witnessing is closely linked with HANNOVER MESSE’s increasing prominence as one of the world’s foremost Industry 4.0 platforms.”

At HANNOVER MESSE, visitors are not just presented with standalone robotics systems; they are also given the opportunity to learn about the specific industrial applications these systems can be used for. And the fair features all types of robots, from the classic stationary industrial robots that get used on assembly lines to mobile robots and automated guided vehicles (AGVs). It even covers industrial service robots, which are becoming increasingly essential in today’s integrated automation solutions.

Among this year’s highlights will be the KUKA Robotics Corporation showcase, which will be themed “Hello Industry 4.0 – We go Digital.” KUKA will use the upcoming fair to launch a new generation of robots that was specifically designed for applications in the electronics industry. Other HANNOVER MESSE highlights include Universal Robots’ collaborative industrial robot arms, Rethink Robotics’ Cobot Sawyer, a new six-axis industrial cleaning robot from Stäubli, and the Mitsubishi showcase, which features the first-ever public live demonstration of a prototype of the company’s RH-1FHR series of ceiling-mounted, high-speed SCARA pick-and-place robots. Visitors will be able to witness the RH-1FHR in action in a BWM GmbH assembly line application.

A rich program of events will provide lots of added value. One highlight will be the presentation of the ROBOTICS AWARD at 3:30 p.m. on Tuesday, 26 April. Another is the Industrial Automation Forum, which will put the spotlight on human-robot collaboration on both Tuesday afternoon and Friday morning.