Today’s Automated Guided Vehicles (AGV) have to meet increasing requirements from the industrial automation: They have to be flexible in their movements, if possible able to freely navigate, should adapt themselves to new automation processes and have to be installed easily and at reasonable cost. Industrial users expect an AGV to find its way in any environment, also a dynamic one, without adapting the environment to the robot’s needs. The ANT Autonomous Navigation Technology developed by BlueBotics for industrial application and service robotics is the answer to these requirements.

Autonomy – more than a trend
This is the domain of the Swiss BlueBotics SA, one of the leading research and development companies in mobile robotics, situated near the prestigious EPF Lausanne. Centrepiece of BlueBotics vehicles and robots is ANT ( 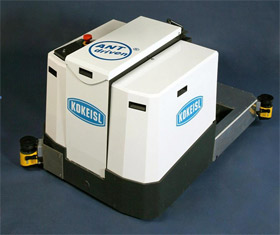 Technology). This unique navigation product facilitates tasks like the positioning of pallets or the load transfer from storage spaces to trucks and rail wagons.

A perfect example is Paquito, developed by BlueBotics partner Esatroll, manufacturer of high-tech systems for industry. The industrial forklift equipped with ANT has a payload of 1200 kg and has been on duty as an autonomous transport vehicle in different Italian companies since 2009. It moves safely through factory buildings at a speed of 1.2 m/s, and handles pallets up to a height of 2.2 m. Paquito can easily be installed and adapts itself rapidly and cost-effectively to new tasks. Thanks to ANT it moves autonomously and handles obstacles in a safe way, without being dependent on artificial guidance landmarks in its surroundings. Due to the clever ANT technology, including embedded high-precision sensors, wireless communication and a reliable safety system, Paquito is also the ideal helper for a safe co-operation with humans.

BlueBotics street-smart robots
The co-operation with the KOKEISL Industrial Systems AG, experienced in industrial production systems, especially for the powder industry, resulted in the KOKEISL Picking Robot (KPR). The modularly built vehicle, powered again by ANT, collects bulk materials of different charges, from a few kilograms up to two tons. The KPR works according to the law of gravity, gathering material in the vertical direction. By using the KOKEISL automatic shovels, it is able to dose and assemble receipts and small quantities with the precision of one gram. Without any difficulty it takes the materials autonomously out of nearly all containers in the plant and looks tirelessly for the transport between the warehouse, the dispensing terminals and the mixing stations. In doing so it moves at a speed of 1.5 m/s and with a precision of 10 mm. Thanks to ANT the smart assistant does not rely on any orientation help in its surroundings, as it is able to perceive its environment and to adapt itself automatically to changes therein. As BlueBotics puts together specialists from computer sciences, micro engineering and mobile robotics, electrical engineering and systems integration beneath the same roof, the crew can offer their industrial partners all services from a single source, from the analysis and the feasibility study to the properly functioning, made-to-measure vehicle.