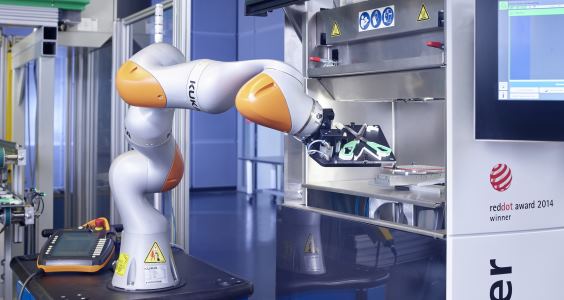 Use of the LBR iiwa enables maximum flexibility at Arburg.
Photo by KUKA Robotics Corp.

In the age of Industry 4.0, “smart factories” are developing at an unprecedented rate. Nowadays, automated, networked and variable production lines are in high demand as companies aim to respond quickly and flexibly to ever shorter product life cycles. At the same time, the issue of how to incorporate individual customer requirements into industrial series production is growing in significance.

The German machinery manufacturer ARBURG has developed a fully automated production line, completely networked in terms of IT processes, which allows series-manufactured injection moldings to be individualized right at the production line, according to the customer’s requirements. To do this, the “freeformer”, ARBURG’s additive manufacturing system, applies customized, plastic lettering and symbols to the molding, resulting in the creation of a unique product. Automation of the freeformer was made possible by KUKA’s system partner, FPT.

Customized office scissor production was demonstrated at the 2015 Fakuma plastics trade fair as a highlight of the key topic “Industry 4.0”. This included: the KUKA LBR iiwa (intelligent industrial work assistant), the world’s first series-produced, sensitive lightweight robot suitable for use in industrial applications, which can interact with humans without requiring a safeguarded zone. This robot combines injection molding with additive manufacturing. The ARBURG host computer system (ALS) plays a central role in the IT networking of the stations.

When submitting an order for customized office scissors, customers can create their personalized lettering for the handles, etc. on a tablet PC. The signature is thus created digitally and saved on a chip card. This is input into the control system on the injection molding machine and series production begins. As part of this process, the plastic handles are molded onto the stainless steel blades which are loaded by a linear robot system. A unique DM code is lasered onto each product. At this point, the product itself becomes a data and information carrier and is assigned its own website containing all production and quality parameters. A KUKA LBR iiwa then removes one pair of office scissors at a time from the injection molding cell’s conveyor belt together with the workpiece carrier.

The product is identified by a scanner on the basis of its DM code which initiates the next production step. Scissors which are to be individualized with customer-specific lettering are passed to the freeformer by the LBR iiwa. The LBR iiwa communicates with the robot system via a Euromap 67 interface and applies the lettering as a plastic 3D geometrical design onto the scissor handles. The LBR iiwa then removes the customized scissors from the freeformer and passes them to the final quality inspection.

The KUKA LBR iiwa plays a central role in customizable series production. As the lightweight robot is equipped with seven axes, it is extremely agile and can combine injection molding with additive manufacturing in an optimum fashion. The LBR iiwa is predestined for extremely flexible production concepts due to its low weight and ideal balance of reach and payload capacity. With its highly responsive sensor technology, the LBR iiwa is designed for direct collaboration with its human “colleagues”, yet can also handle sensitive products safely and does not require a safeguarded zone. This means that skilled workers can pass workpieces to the robot directly, if necessary, which makes the production process even more flexible and saves on space.