The latest Toshiba Machine Scara robots will be on display at Automatica taking place from 22-25 May 2012 at the new Munich Trade Fair Centre. In Hall B2, Booth 308, we will highlight how TOSHIBA MACHINE THL models satisfy the growing demand for affordable, flexible automation in applications outside of industries such as packaging, materials handling and welding where robots have been installed for decades. 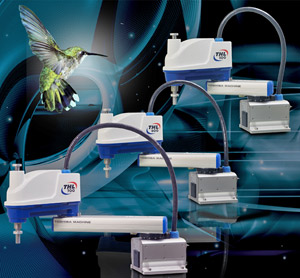 The aim was to achieve low mass and low inertia with the necessary rigidity from which high accuracy is attained. Reduction in mass is thanks to the use of lightweight cast aluminium mechanical components that have a series of ribbed sections to provide rigidity. As a result, smaller servo motors have been fitted. Moreover, because the lightweight system generates substantially less inertia a simplified gearbox has been used.

The THL range is up to 50% lighter than other Toshiba Machine models and the robots consume 50% less electricity. Performance compares favourably with other models and the new robots feature easier maintenance than previously.

Available on 500mm, 600mm and 700mm arm lengths, the next surprising revelation is that all three models have exactly the same price. Toshiba Machine explains that since the only difference between the three robots is the length of the extruded aluminium tube that forms the arm’s main beam, the cost difference is negligible.