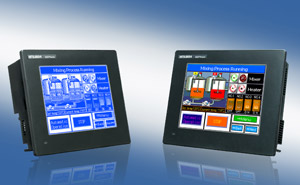 Mitsubishi Electric has added two new entry-level models to its GOT1000 series of HMI control terminals. The two touchscreen control units with 5.7” displays round off the upper end of the GT10 product family, which is designed for standard industrial and building services automation tasks. The compact control units deliver powerful visualisation functions for these applications at a very attractive price. Users with more demanding control terminal and visualisation needs can choose models from the GT11 and GT15 families, which are available with diagonal screen widths of up to 15”.

The two new GT1050 and GT1055 graphical control units are available with 5.7” monochrome or colour displays. This size has now become established as the standard for local human-machine interfaces (HMI) in small and medium-sized control units. With a resolution of 320 x 240 pixels the STN (Super Twisted Nematic) touchscreen displays are bright, crisp and legible. They support 16 blue shades or 256 colours and provide a clear representation of machine and system operations. Three megabytes of project memory provides ample capacity, even for larger projects.

System solution for smooth integration
The standard configuration includes a USB programming port and two serial ports (RS-232 and RS-422) with transfer rates of up to 115kbaud for fast communication with connected devices. Drivers are available for Mitsubishi’s compact and modular programmable logic controllers of the FX and System Q series, the Alpha micro-controller series, the FR series of frequency inverter drives and also common controllers from other manufacturers.

One of the big strengths of all Mitsubishi Electric’s HMI control terminals is their compatibility with the company’s other products. For example, in Transparent mode you can load PLC and frequency inverter drive programs via a programming cable connected to the control units’ USB port. A PLC device monitor and a program editor for the graphical Ladder Diagram programming language are also integrated in the new models for use with Mitsubishi’s FX controllers.

Graphical programming
Like its predecessors, the latest version of the GT Designer2 control unit software is a user-friendly and intuitive programming tool. A comprehensive library of ready-to-use graphical objects, including switches, lamps, keypads, valves, pumps and standard ISO symbols and a large selection of fonts make it easy to create clear user interface screens so that you can get the control units up and running fast. A plug-in memory card specially developed for series production of machines is available for storing, transferring and restoring projects quickly and easily.

As successors of the F940GOT control units the attractively-priced new models offer faster communications, more memory and better screen displays. Identical dimensions and the same standard soft-ware that is used for all GOT (Graphical Operator Terminal) series make it easy to update existing applications.

A wealth of functions
The universal GT10 family control units are designed for local op-d monitoring of machines and smaller systems, and de-spite their entry-level class they are extremely capable devices with a full set of features, including things like setpoint value entry, alarm displays, recipe handling, password protection and support for multi-language user interfaces. They also support the current Unicode standard that enables them to display complex character sets and fonts correctly. The language of the user interface can be changed at the touch of a button for international deployment. Their robust front panels allow installation directly at the machine, with an IP67f ingress protection rating making them safe for use in environments where they can be exposed to dust, water sprays and aggressive coolants and lubricants.

Perfect application visualisation
The GOT1000 series also has a range of models for more demanding operation and visualisation tasks: the GT11 and GT15 families include standard units for serial communications with 5.7” displays and in the top range there are also units with up to 15” displays and an optional MES (Manufacturing Execution System) function.

The GOT1000 series is part of Mitsubishi Electric’s Vision 1000 process visualization concept, which encompasses three different series with over 60 individual models. They range from simple key-operated control units to touchscreen devices and powerful industrial PCs, providing an excellent selection of flexible operation and visualization tools for a huge range ofindustrial applications. The other two components of the Vision 1000 concept are the E1000 and IPC1000 series.