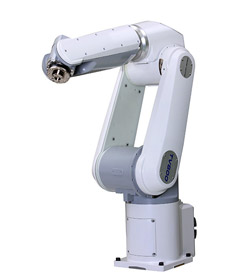 The new TV800 EZ Cell robot, launched in the UK by TM Robotics (Europe) recently, is the first six axis robot ever manufactured by Toshiba Machine. The launch represents a significant development in the automation market, because Toshiba Machine is now one of the only major players in the industry to offer a complete range of robot technologies – six axis, Cartesian and scara. Ideal for the manufacturing sector, the robot will find uses in a host of pick and place applications.

The TV800 has a total arm length of 800mm, a reach of 892mm and a composite maximum speed of 8.06 metres per second. The robot has a maximum cycle time of 0.4 to 0.5 seconds, repeatability of ±0.02mm and a maximum payload of five kilograms. Its controlled using Toshiba Machine’s new TS3100 controller, which is programmed in SCOL , a language similar to BASIC as are all Toshiba Machine industrial robots, and has the option of a teach pendant for easy access outside the robot cell.

“The TV800 completes the set for Toshiba Machine and for us,” explained Nigel Smith, managing director of TM Robotics. “We now offer the widest range ofSCARA robots on the market, a Cartesian solution that can be configured in literally hundreds of ways and a six axis robot that can be compared with the very best in its class. Coupled with the ability of our IP65 SCARA robot to compete, on an equal footing, with flexipickers in industries such as food and pharmaceuticals, our range now feels whole.”
The new six axis robot uses an absolute position detection system, with a robust AC motor at its heart. Axes one to six offer working envelopes of ±170º, -100 – +150º, -127 – +167º, ±190º, ±120º and ±360º respectively. They also feature maximum speeds of 237º/S, 240º/S, 288º/S, 350.5º/S, 484º/S, and 576º/S respectively. The allowable moment of inertia on axis four and five is 0.3kg · m2 and on axis six its 0.5kg · m2.