In only 10 years, a team spinning-off from the EPF Lausanne stirred up the market with a new generation of mobile robotics technologies off the beaten tracks. With their company BlueBotics they have become an indispensable problem solver for their industrial partners thanks to their core competence, the Autonomous Navigation Technology ANT®.

Impossible to assume away robots from industry! In the USA, about 90% of these indefatigable blue-collar workers are active in manufacturing as assemblers or creating products, half of them operate in the automobile industry. It’s a matter of fact: robots bring more safety as they assume tasks too dangerous for humans and – being never sick or on holiday – they do the job more efficiently and reduce costs. But as technologies are improving, the requirements of industry increase. The BlueBotics engineers met their first challenge at the Swiss National Exhibition. There, at the Lake of Neuchâtel, they introduced in 2002 about 11 autonomous, freely navigating tour guide robots called RoboX, who gave information to more than 680’000 visitors, worked uncomplainingly during 13’000 hours and walked thereby more than 3’000 km. The response of industry to the navigation ability of the RoboX was so heavy that BlueBotics decided to extend its field of application. 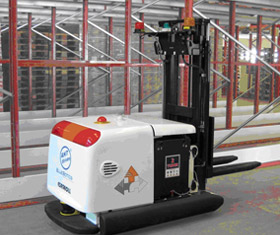 In 2007, Nesbot™ caused a sensation at theInternational Conference on Robotics and Automation (ICRA) in Rome when the robot served at the BlueBotics booth up to 150 coffees a day to visitors. This fully autonomous and completely embedded mobile coffee machine with user interfaces for professional services – developed together with Nestlé Nespresso SA – shows how an independent serving platform could revolutionize the art of beverage and food ordering. Behind both developments is ANT®, BlueBotics own Autonomous Navigation Technology. Thanks to ANT®, it is unnecessary to change the environment for navigation, vehicles autonomously handle obstacles and move within a defined area and they are adaptable to new automation processes like free pallet positioning, load transfer to trucks or deep stacking.

But BlueBotics aimed much higher: On behalf of the European Space Agency (ESA), its engineers participated in various development phases for the ExoMars mission, developing and producing all the rovers for the latest B2 phase.

Always on the scout of innovative partnership, the BlueBotics crew collaborated with Esatroll SA, specialist for automated guided vehicles (AGVs) in Italy, to create Gilberto, the robot guide and information desk equipped with ANT®.

Later on, the team made use of Esatroll’s cost-efficient forklift for logistics and launched Paquito. With the performance of the ANT® navigation system, the flexibility and the easy installation and modification, BlueBotics introduced a new standard into the market with this industrial forklift running with a payload of 1200 kg, moving autonomously and safely through factory buildings at a speed of 1.2 m/s and handling pallets up to a height of 2.2 m. Since 2009, Paquito offers its distinguished services to different Italian companies.

A new wind was blowing in 2010 with the collaboration with KOKEISL Industrial Systems AG, international vendor and system provider of automated systems for the bulk solids industry and AGVs. The joint work resulted in the KOKEISL Picking Robot (KPR), a modularly built vehicle powered by ANT®. The robot is a multi-talent, collecting bulk materials of different charges, from a few kilograms up to two tons. Working in harmony with the law of gravity, KPR gathers materials in the vertical direction. Using automatic shovels, it can dose and assemble receipts and small quantities with the precision of one gram. KPR takes material autonomously out of nearly all containers in the plant and looks after the transport between the warehouse, the dispensing terminals and the mixing stations at a speed of 1.5 m/s and with a precision of ± 10 mm. With ANT®, the robot does not need any landmark to orient itself in a surrounding, being able to adapt itself automatically when the setting undergoes modifications.

Latest developments and collaborations now include the integration of ANT® into standard manual forklifts like the Linde L12, and development of additional ANT® based collaboration in the industrial logistics market all around Europe, and above. In parallel with BlueBotics’ growing presence in the logistics market, the company continues its R&D based activities with partners to jointly develop innovative service robotics applications with high added value.

It is not a secret; many experts forecast the 21st century to be the century of robotics. Only time will tell if they are right. Whatever the answer will be, with the experience of a decade in the field, BlueBotics’ team feels ready to face the challenges that will accompany a rapid growth of the service robotics industry.