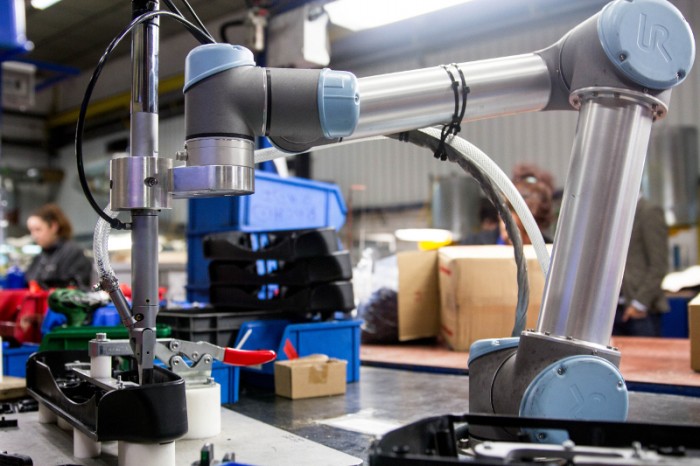 SHAD, the leading European manufacturer of top and side cargo cases for motorcycles installs its first UR5 from Universal Robots in its factory in Mollet del Valles (Catalonia, Spain). The collaborative robot arm has streamlined production, enabling the cases to be assembled in half the time, while also enhancing the work environment for employees.

The Spanish company NADSL, best known for its SHAD brand of top and side cargo cases for motorcycles, manufactures original equipment (seats and cases) for the world’s leading motorbike manufacturers. The company chose Universal Robot’s collaborative robots to optimize its production processes thanks to their ease-of-use and the fact that they can be operated without the need for safety barriers. The UR5 six-axis robot works side by side with plant personnel in a shared environment, where it frees them up from having to do the more repetitive tasks such as screwing in screws on the cases, thereby enhancing production cycle time and quality, as well as helping to improve the work area.

The NADSL factory in Mollet del Valles, Barcelona, has 40 years experience in manufacturing original equipment for motorbikes, mainly seats and top and side cases for OEMs such as Yamaha, Honda, Suzuki, Piaggio, Peugeot and BMW. The company also manufactures and markets cases and seats under its own SHAD brand and has been expanding its product catalogue in recent years to include bags for motorbikes, top cases for quadbikes, custom-made seat backs for scooters and communication accessories such as Bluetooth hands free kits and holder mounts for smartphones.

Achieving betterment through technology is one of the company’s main challenges, not only in the design of new products but also in their production. Shad had considered previously the possibility of installing a robot, but due to their customary short production runs, the cost of a traditional industrial robot could not be justified. Besides the issue of the return on investment, they were also looking for a solution that could operate alongside its production workers in limited spaces. The UR5, Universal Robots’ 18kg model with 5kg payload, fulfilled these requirements. Furthermore it was possible for the company to install it in practically the same amount of space required to manually assemble the cases and with the same initial cost investment as that of a normal robot, but through a much simpler installation process that helped reduce to a minimum the costs of setting it up.

The installation of the robot was done by its operators in two stages: in the first stage tests were done using the robot with a pneumatic screwdriver alongside the operator who, at the same time, was screwing in the same parts manually. This stage served as a comparison between the automated and the manual processes and allowed the production line managers to define the best way to configure the robot in order to streamline the collaborative process between robot and operator.

In the second stage, the UR5 was installed so that the operator could carry out the manual preparation (such as place the parts in their line position) whilst the robot performed the more repetitive tasks of picking up the screws and driving them into the parts. It was therefore possible to optimize the entire task, and assemble parts in half the time.

“The installation of the robot represents a technological improvement in our production that has enhanced the quality of the product and helped us reduce costs at the same time”, comments Joan Planas, engineer at NADSL.

Universal Robots’ official distributor in Catalonia, Vicosystems, supplied the robot to NADSL, and SHAD are very satisfied with the utilization of the robot which has improved working conditions for the production personnel thanks to the robot taking on the most repetitive tasks such as driving in screws. The development of the programming was done in less than two weeks and in one or two days the rest of the production personnel were able to carry out maintenance tasks and adjustments in the configuration (such as modifying point positions, programming timers, etc). The UR robot also has a guided system for configuring the pass points, the Teach mode, allowing operators to simply grab the robot arm to “teach” the robot the desired moves. Although as Joan Planas explains: “For the operators it was very easy to familiarize themselves with robot’s graphic interface”.

The Universal Robots robotic arm is the first collaborative robot to be installed in the factory in Catalonia, but due to the positive results so far, Shad is looking to install a second robot in other areas of its production plant.