The Robot Virtual World team of Carnegie Mellon’s Robotics Academy has just released a beta version of it’s latest game, Expedition Atlantis! It’s the year 2023 and Atlantis has been discovered deep in the ocean, off of the coast of Africa. A team of elite scientists and engineers have been sent to investigate the underwater ruins, and you’re one of them! Use your skills to to maneuver the teams underwater vehicles in this expedition to Atlantis!

Proportional problems are embedded everywhere. Expedition Atlantis provides students with the big ideas needed to become proficient proportional thinkers. Check out this video to see how:

The game begins with your submarine being deployed from a large mothership, beginning your expedition to Atlantis. A large underwater storm throws the submarine off course and into a cliff side! 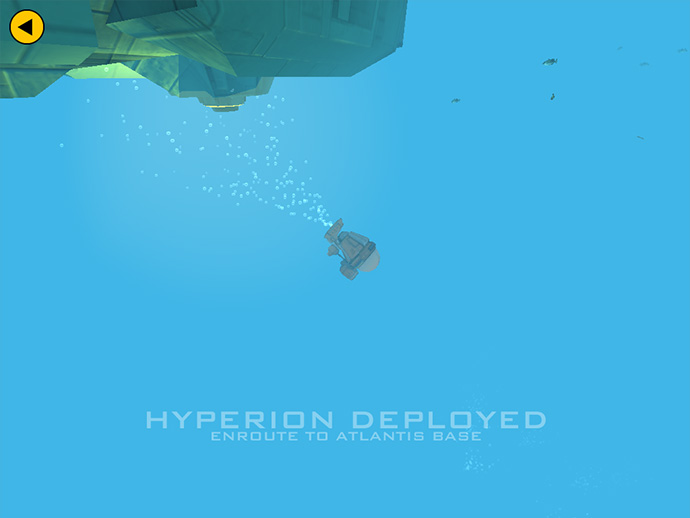 Fortunately, the submarine was equipped with an escape pod! The underwater storm is still acting up, so you’ll need to move the robot to areas with cover between outbursts. The mothership will transmit how far away the next safe zone is; you’ll need to calculate how many wheel rotations it will take to get there. Be careful not to move too far or too little or you’ll be blown around the ocean floor! 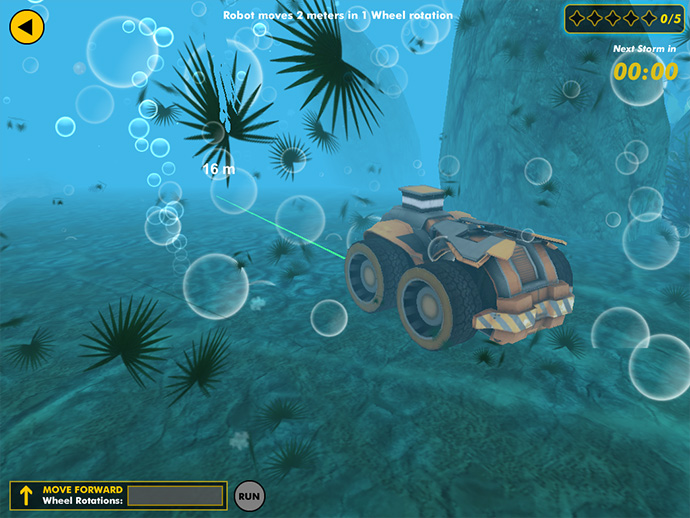 A special training mode is available to help you learn how proportional relationships work, like how turning a number of wheel rotations translates into moving forward a certain distance.

Expedition Atlantis can be played with four different difficulty levels: Cadet (Easy), Explorer (Medium), Admiral (hard), and Custom. With custom mode, you can set how many problems you need to solve in each level of the game, and how hard the problems are. You’ll also notice that there are 4 main levels to the game. 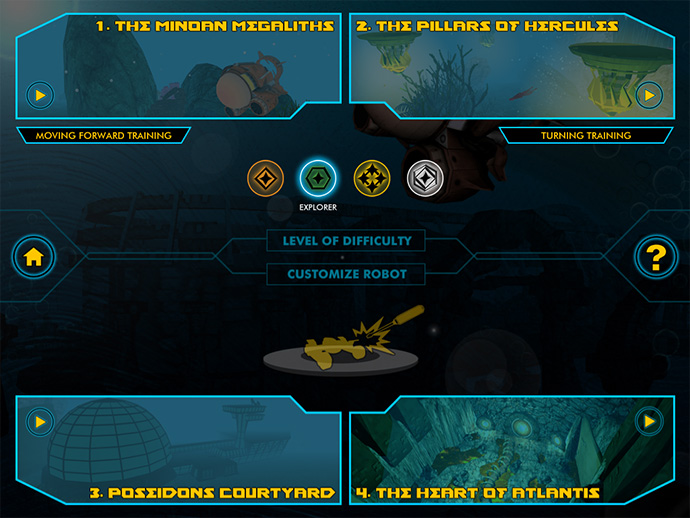 After completing Level 1, the Minoan Megaliths, you’ll reach Level 2, the Pillars of Hercules. Underwater platforms appear to allow your escape pod to cross the chasm. You’ll need to calculate how much the robot needs to turn to line itself up with the next platform, before the robots thrusters engage. Be careful or your robot will thrust itself right to the bottom of the chasm! 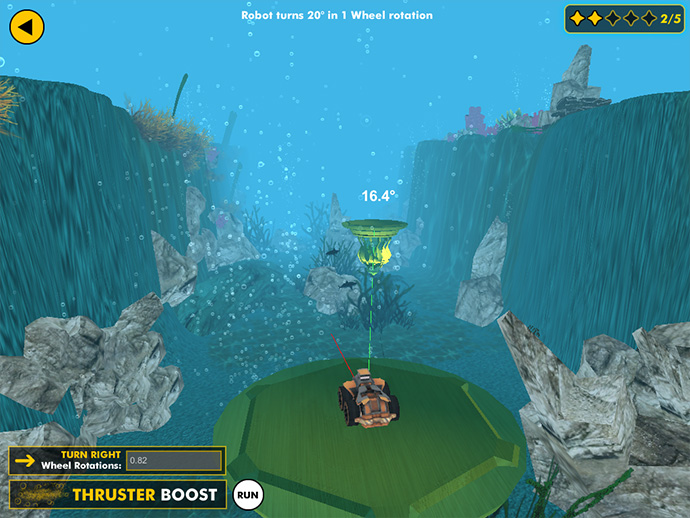 Once you cross the chasm, you’ll reach the Atlantis Base and be equipped with a robot capable of catching cargo from the mothership. The storm is still acting up and throwing the cargo off course, so you’ll need to calculate how much the robot needs to turn and move forward to catch the cargo in Poseidons Courtyard. 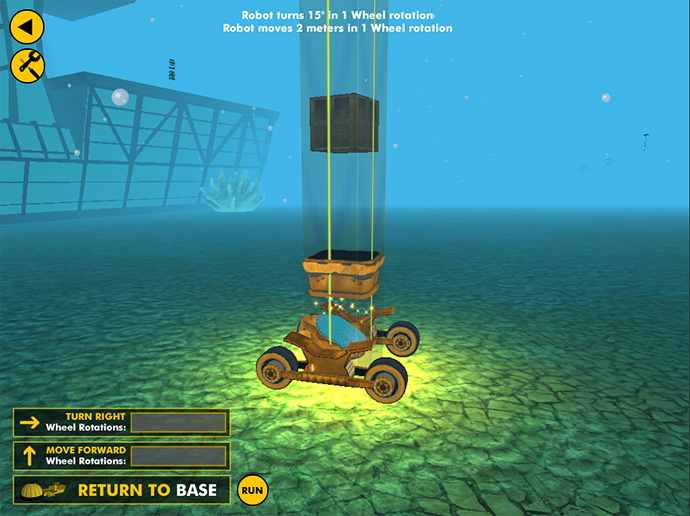 The cargo you catch contains upgrades for your robot, which will be crucial for the final part of your mission. Take the cargo back to base to equip the upgrades! 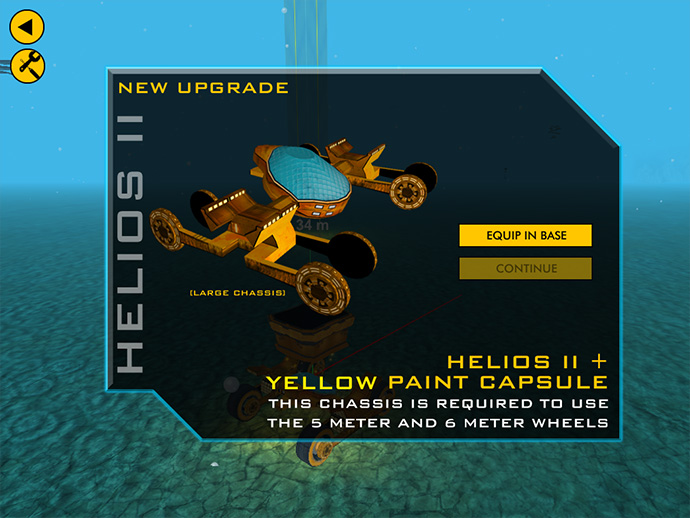 In the underwater base, you’ll be able to equip all of the upgrades that you caught in Poseidons Courtyard. Upgrades range from different wheels, different robot bodies (chassis), powerful attachments, and even paint colors. 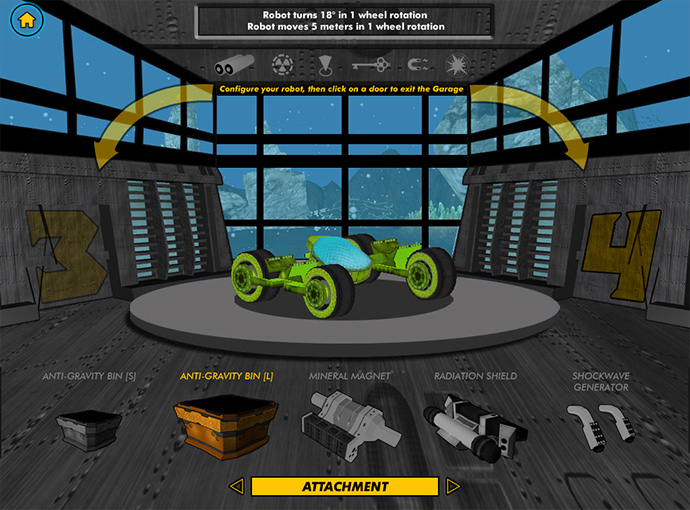 With your upgraded robot, you’ll be ready to explore the Heart of Atlantis. You’ll be completely in charge of marking where your robot needs to go, performing the calculations to get it there. Be careful! Ancient Atlantis was highly advanced technologically – it has a reactor core and portal network which is still operational today, but sensor readings indicate that they are unstable. Your robots radiation shield will protect it from the radiation, but will also slowly drain its batteries. 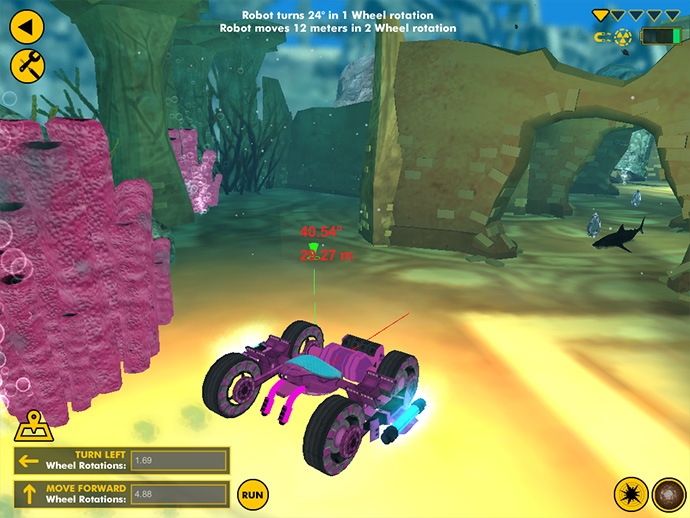 As you make progress in Atlantis, you’ll be rewarded with achievements. These achievements will also show up on your “My Achievements” page on CS2N, if you logged into the game with your CS2N username! 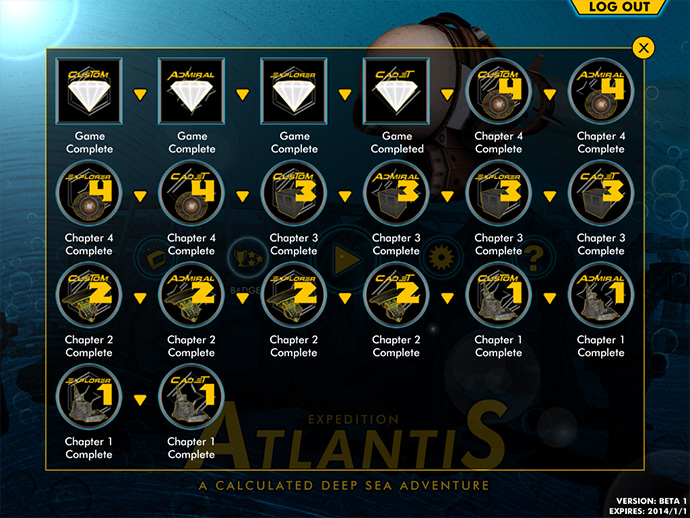 Why Use Expedition Atlantis?

Expedition Atlantis is designed to be a fun, educational tool to teach and reinforce proportional relationships. When complete, it will be accompanied with a full Teacher’s Guide that provides information on its use in the classroom, ties into mathematical standards, and other valuable information. It’s also available completely for free during our Beta and Feedback period, so download it today!