Humanoids – Getting Better by the Day

Near real-live humanoid robots are most likely to become a new species to populate the earth in the future. Commonly called social robots, these autonomous humanoids are being designed to accomplish chores that are increasingly becoming unpleasant for people such as grocery shopping, carrying packages in shopping malls, serving the sick and elderly, or even narrating stories and entertaining, not to forget the participation in military missions. Early replicas of these humanoids are residing in numerous robotics laboratories undergoing perfection in their cognitive and motor-sensory abilities, appearance, behavior, speech and how to properly chat like their human counterparts. Considering the pace in development, it might take less than two decades before the first near real-live humanoids replace humans at work and home.

Some of the pacesetters in this field are the universities of Osaka in Japan, Bristol in the UK, Genoa in Italy, and San Diego in the United States.

Professor Ishiguro of the Intelligent Robotics Laboratory at the Osaka University addresses these issues following some approaches in the robotics and cognitive science which resulted in the more human-like Repliee Q2 Humanoid, and the Geminoid, a near true-copy of himself.

> more videos from the Android Geminoid 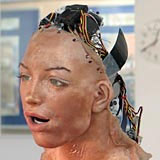 In England, the Bristol Robotics Lab is working on techniques for the classification of dynamic facial expressions in humans and the generation of appropriate dynamic expression in the robot to better shape its appearance which is vital in social role playing.

> more videos from the BRL

The Artificial Intelligence Laboratory of the University of Zurich has developed the ECCEROBOT (Embodied Cognition in a Compliantly Engineered Robot) which replicates human cognitive features through sensory motoring coupling. A very important development in this field because sensory motoring coupling will help robots handle and control their hands and legs in near-humanlike faction.

> more videos of the ECCEROBOT Robot

Another fascinating project is the Ibn Sina Robot, the Arabic speaking humanoid robot, designed under the direction of Prof. Nikolaos Mavridis of the Interactive Robots and Media Laboratory (IRML) of the United Arab Emirates University. The concept behind Ibn Sina project is to enable interaction between humans, robots and virtual agents.

At Dr. Giorgio Metta’s Laboratory for Integrated Advanced Robotics, LIRA-LAB, at the University of Genoa, one sees the “iCub,” designed to imitate the learning capacity of a three-year old.

> more videos of the iCub Humanoid 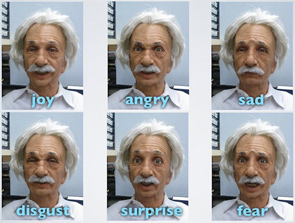 A more advanced and realistic Einstein robot is under development in the Machine Perception Laboratory at the University of San Diego. The idea behind this project is to develop computer vision based facial expression recognition systems that perceive and interact with humans in real time through natural communicative means.

> more videos of the Einstein robot

In short, humanoid science is moving at a fast pace and it will only be a matter of time before robots will relieve us of many difficult chores such as hard farming labor, underwater and space explorations, anxieties of the battle field and demolition and construction work. See other humanoids projects on our Universities Robotics Platform at EXPO21XX.com.